Michael's Paternal Lineage is CUMMINS. This line arrived in the original Jamestown settlement, fought in the American Revolution, the War of 1812, the Civil War, the Vietnam War, the first Gulf War, Bosnia-Herzegovina and Somalia. They were, historically, independant farmers and laborers who served in the military.

General History of the Cummins Surname

The Cummins surname finds its roots in the lands of Normandy (Home of the Northmen), France. Our earliest ancestors were followers of Rollo the Viking, who signed a treaty with King Charles the Simple in 911 A.D. The treaty gave the Norseman a permenant home on French soil, and they soon began to intermarry with the local girls and even adopted the French language.

Rollo's descendants became Dukes of Normandy, and his Viking Leaders became Knights who controlled their own local fiefs from wooden castles on earthen mounds. Soon the trans-planted Norsemen had absorbed the local culture so thoroughly that their sons had to be taught Norse as a second language.

The Normans became Christians and built many abbies and monastaries. They established a feudal society and became renowned throughout Europe for their military prowess. They wore conical helmets with distinctive noseguards, mail shirts, battle axes and the now infamous Kite Shields. They were proficient horsemen and had an extremely effective calvary in France.

In 1066 William the Conquerer, Rollo's Grandson, brought an army of 8,000 to England in Viking longships intent on conquering the island. After victory at the Battle of Hastings, William proclaimed himself King of England and rewarded his noble followers with grants of English land. 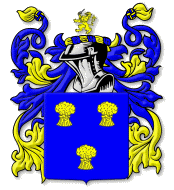 The Normans were a humorous lot, and many respectable English names were actually derived from Norse nicknames. Today's Duke of Westminster, Grosvenor, can be traced to a young Norman knight nick-named "Le Gros Venoir", which means "The Fat Hunter". Similar nicknames rendered "The Moustasched One: Al Grenon" to "Algernon" and "The Big One: Le Grand" eventually became "Grant".

The Norman noble Robert de Comines became the Earl of North Umberland. Robert took his name from his former fief, Comines, located near the Belgian border. His fellow Normans soon punned his territorial title into "Cummin", an aromatic herb. In fact, the Coat of Arms bears three sheaves of wheat, which were originally bundles of this herb.

The name Comyn became an integral part of early Scottish nobility. Willelmus Comyn was the Chancellor to King David the First. He was a churchman, and was assiassinated with poison over disputes with his fellow clergymen. William de Comyn married the granddaughter of King Donald III in 1144 and thus his descendant became one of the competitors for the Scottish throne in 1291. His nephew, Richard de Comyn, married a grand-daughter of King Duncan I. Through "carefull alliances and beneficial marriages the Comyn held three earldoms by the 13th century; Monteith, Mentieth and Atholl and Buchan." By the 13th century the Comyn clan was the most powerful clan in Scotland, claiming nearly one quarter of all the earls.

In 1306 Robert the Bruce, another claimant to the throne, invited John "The Red" Comyn to the church of the Grey Friars in Dumfries to discuss an alliance between them against the English Crown. John Comyn either refused to cooperate or threatened to expose Robert de Bruce's intentions for Robert stabbed "The Red" Comyn, killing him. The Bruce was later excommunicated for the act. A feud commenced, and Bruce and his allies defeated and scattered my ancestors.

John Comyn's son was later killed at Bannockburn, fighting for the English Crown. The family lands of the Badenoch Comyns were forfeited and distributed to allies of Bruce.