Wendy and I both enjoy pistol marksmanship and hold a number of pistol certifications. Speaking only for myself, I find it a relaxing sport and liken it to Zen Archery.

Zen and the Art of Combat Pistol Shooting

Zen has always been associated with various marital arts, including archery and swordsmanship. But more and more, we are beginning to apply much of the same Zen principles to enhance our shooting skills. Zen is difficult to define. Yet ask any player of sporting games to explain their peak performance and they'll tell you that in a special moment, the mind, the body, the goal, the tool and the result are simply one.

To accomplish something without thinking - it merely occurs - this is Zen.

"Don't think of what you have to do, don't consider how to carry it out! The shot will only go smoothly when it takes the archer himself by surprise." Eugen Herrigel, Zen in the Art of Archery

Like the Zen archers of Japan and the sword masters, we train to excel at all times with any firearm at the limits of human speed, distance, and against all adversaries under any circumstances. To achieve this level of proficiency, we must learn to become one with the pistol, we must learn to shoot without thought. The physical act of firing the pistol must blend with the mental aspect of con­trol, planning, and discipline to achieve the desired goal.

"In the end, the pupil no longer knows which of the two – mind or hand – was responsible for the work." Eugen Herrigel, Zen in the Art of Archery

The shooter must be in control of him­self, not just the pistol. He must have a clear mind that is perfectly still. Most shooters' minds are like a stream of rapids filled with self-doubt, fear, and irrelevant thoughts.

The Four Basics of Gun Safety

These rules were developed by Colonel Jeff Cooper, and are non-negotiable and have no exceptions.

The Seven Fundamentals of Handgun Shooting 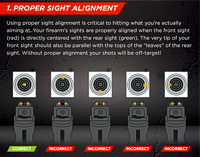 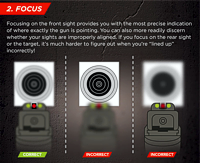 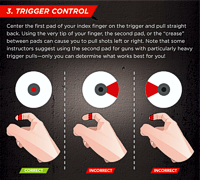 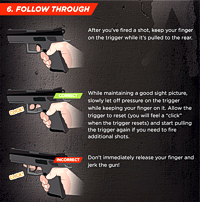 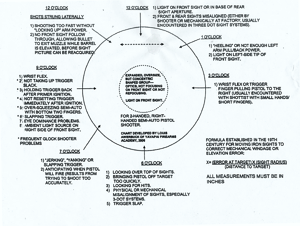 "…while a diagnostic target … can certainly help you figure out what you might be doing wrong, be sure to pay attention to everything you’re doing. If you hit a plateau and can’t get past it, find a qualified instructor who can watch you shoot and perform some real shooting diagnosis." Todd G

Recovering from a Malfunction

"Knowing how to address different types of handgun malfunctions is crucial to your safety, the safety of those around you, and will minimize any potential damage to your handgun." Brandon Curtis

"Proper cleaning and maintenance of a firearm play a big role in preventing malfunctions." Wikipedia

A lot of people remind shooters that Tap Rack Bang might clear most malfunctions, but can be very dangerous for malfunctions like a squib load where the projectile hasn't left the barrel for one reason or another. That's why "Assess" is in there. If the discharge sounded much quieter than normal (sometimes called a "pop and no kick") or you are even just suspicious, leave the "Bang" off the drill and make sure your weapon is clear. Check out this Wikipedia article on the different kinds of Firearm malfunctions, or this article on Handgun Malfunctions and Stoppages by USA Carry. 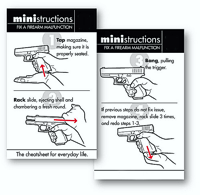 The most important means of surviving a lethal confrontation, according to Colonel Jeff Cooper, is neither the weapon nor the martial skills. The primary tool is the combat mindset, set forth in his book, Principles of Personal Defense.